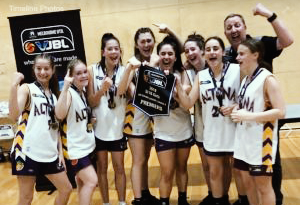 Altona Gators U16-3 Girls are the VJL6 Premiers after a gutsy come from behind win to beat the Bulleen Boomers.

The Bulleen Boomers had finished on top of the ladder and had beaten the Gators twice during the Season but the Altona Girls stepped up in the Semi-Final to finally get a win over over the Boomers.

The Grand Final would prove once & for all which team had the most determination to take out the Championship.

In the first half both teams found it difficult to score with Defense being the focus but the Altona Gators would hold a slight lead 11-10 over Bulleen Boomers at half time.

Bulleen come out the stronger team in the third term to take back the lead by 3 points at the last break as Gators struggled to score.

However a gutsy effort from Altona Gator Girls in the last quarter who finally got their offensive game going and coming from behind to win 25-23 to take the Championship.

Outstanding effort by the Gators U16-3 Girls all season and magnificent how they were able to step up their game in the Finals.

Congratulations to Coach Sean Crees and Team Manager Chris Karagiannis on all your efforts in preparing the Girls for this Season.